Have you ever taken a vacation and made sure to include a visit to a place or site that was mentioned in a book you read?  I know I can’t be the only one!  Over the years I’ve managed to cross a few things off my bucket list of places to visit … The Gardner Museum in Boston, The Cloisters, the Library, the Met and Central Park in NYC, The Art Institute in Chicago, and The Louvre and Versailles in Paris – yes – museums and galleries seem to be the theme of prominence.  My travel bucket list just got a whole lot longer after reading this book (now if only my lottery numbers would hit).  If this book is any indication they should definitely hire authors to write travelogues. 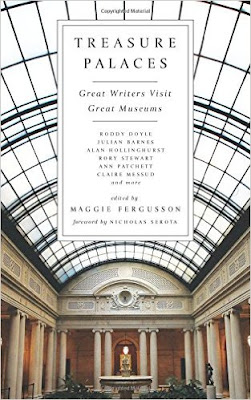 When Tim de Lisle took over as editor of “Intelligent Life” magazine he was inspired by a museum trip with his children to publish a series of articles titled “Authors on Museums” in which “in each issue of Intelligent Life a distinguished writer – not an art critic – would return to a museum that had played some part in their life, and write about what they liked (or didn’t) about it, weaving in a thread of memoir.”  There were some misses such as when “David Sedaris admitted that he wasn’t a museums kind of person, but a ‘gift shop and café kind of person’.”

In the stories selected for this book it is interesting to note that most of the museums the authors chose to revisit were small, often obscure, places that spoke to them on a personal level.  The galleries and museums range, geographically, from New York City to Zagreb and from Stockholm to Australia.  Each article is, of course, written in the first person and many have a conversational tone that made this non-fiction book very easy and most enjoyable to read.  Each author’s reason for their choice of museum was as varied as the choices themselves.  If you enjoy art galleries and museums or are an armchair traveler, like myself, this book is a must read.  I promise you will have a few places to add to your personal bucket list as well.

The Lower East Side Tenement Museum (Roddy Doyle)
The first article in the book is also the top pick on my revised bucket list.  On the morning of October 1874 Mrs. Gumpertz’s husband left for work and never returned, leaving her with children to support and no income.  The story was not uncommon in the tenements of 1800’s New York City.  This museum stands as the tenement did then, when the landlord did not want the expense of doing necessary repairs and evicted all the residents.  As the author explains, “That is why the Tenement Museum is so special and why I’m here for the third time in 15 years.  No famous people lived here.  But people did. It’s hard not to expect Mrs. Grumpertz to walk in and demand to know what I’m doing here, in their home.  ‘Looking at your wallpaper would be the answer.’”

The Museum of Broken Relationships (Aminatta Forna)
This museum is a collection of items donated by people who have lost their loves.  A married man donated a shaving kit given to him by his 17-year old mistress in the 1980’s.  When he donated the shaving kit he wrote a note that read, “I hope she doesn’t love me any more.  I hope she doesn’t know she was the only person I ever loved.”  The museum contains everything from stuffed animals and silk dresses to hats, books and a special pair of motorcycle boots donated by a young man who purchased them for his girlfriend Anna.  He and Anna eventually broke up and over the years several other girls wore the boots on the back of his bike but in his mind those boots would always be “Anna’s boots”.  Exchanging tokens of love is something we all do and all the best sources advise to get rid of those things if the relationship ends.  Sometimes we just cannot bear to do that so why not give them a home in the “Museum of Broken Relationships”?

One article in this book moved me to tears; In Flanders Fields Museum, Ypres (Michael Morpurgo) so this museum is on my list of places I will probably never seek out, for the same reason I did not go to Ground Zero when I was in NYC and will not visit the 911 Memorial.  I will not go to Auschwitz, nor the Holocaust Museum.  As touchingly as Mr. Morpurgo wrote of the museum and its stories, and as much as I enjoy most aspects of history these museums are difficult to walk through.  I did find myself at the memorial for the Oklahoma Bombing.  It was incredible and it stays with me to this day, so many years later and that’s why I won’t go back there or seek out Flanders Fields … the voices of the ghosts are too loud and haunt me for too long.

Musee Rodin in Paris (Allison Pearson)
Who has not seen at least a picture of Rodin’s famous “The Kiss”?  Ms Pearson visits the museum 30 years after her first introduction to the statue, “Three decades on, I wonder what I saw in this monumental snog.  It would sit perfectly in a Las Vegas chapel of lurve.  Sometimes marble feels too smooth, too chilly for Rodin’s purposes; these days I am moved by the rougher and readier terracotta Kiss that sits in a modest glass case to one side of the original.  Still, I owe that first Kiss.  For a group of weary teenagers from the Midlands, here was remarkable news.  Dead people had felt these things; and the living went on feeling them.”  Explaining a scene from a movie in which Ingrid Bergman is overcome by looking at the agonized figures cast in the ashes of Pompeii Ms. Pearson explains “I recognized the expression on her face … What Vesuvius did by accident, Rodin did by design.”

Pitt Rivers Museum in Oxford (Frank Cotrell-Boyce)
The first question every visitor asks when visiting the Pitts River for the first time is “where are the shrunken heads”.  These heads are the star attraction even inspiring a scene in Harry Potter.  The Pitts Rivers is a giant cabinet of curiosities. “Nowadays it’s well signposted and staffed.  Back then it took a bit of nerve to step out of the soaring daylight of the National Museum into the shadows of the Pitt Rivers.  A museum hidden, tucked inside a museum.  Inside there were more doors to dare.”

The above were some of my personal favorites but all of those included in the book were wonderful.  I borrowed this book from the library but it will definitely find its way onto my permanent bookshelf sometime in the future, if only to use as a reference when I accumulate enough Air Miles to take another amazing trip.

ABOUT THE EDITOR (from the book cover)

Maggie Ferguson was for many years the literary editor of “The Economist’s” lifestyle magazine, “Intelligent Life”, and is the author of two biographies, “George Mackay Brown: The Life” and “Michael Morpurgo: War Child to War Horse”.