Except the Dying - A Review

I can’t believe it’s already the first of February and I haven’t posted one review.  In my own defence I got that horrific cold that’s going around – it’s a bad one – so stay healthy everybody.  I still have the tail end of the cough.  Also, every time I fired up the computer I had other things to do on it.  After being downsized out the door at my job at the end of last year I decided that while I have the safety net of unemployment benefits I am going to try to start a small home based business – but more on that later this week.  There are some prizes in the offing so stay tuned.

Sick as I was I was still reading, mostly light stuff that I could digest through my stuffy sinuses.  My BFF has long been a fan of the television series “Murdock Mysteries”.  I finally gave it a look when I was up at strange hours because of my cough and there were reruns on at crazy morning times.  I was pretty quickly hooked because it’s a rather clever series set in turn of the 19th century Toronto.  Of course when I found out that the series was based on books – WELL! – You know I had to pick up the books.  So on to my first review of 2017 …

EXCEPT THE DYING by Maureen Jenkins 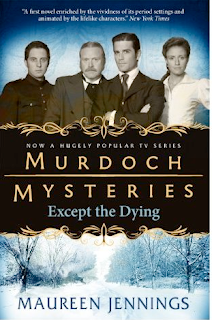 In the winter of 1895 Toronto acting Detective William Murdock is called out to a murder scene.  A young woman is found naked in an alleyway.  She is clearly not a lady of the evening and winter in Toronto is not a time anyone would be outside without clothing so obviously, this young woman met with foul play.

William Murdock knows no boundaries when it comes to looking for a killer.  He visits the lowest and highest echelons of society to look for his answers.  And answers he finds through meticulous police work without the availability of all toys and whistles a reader might be used to in more modern police procedurals.

This was Ms. Jennings debut book and it was an interesting read.  It showed some good research into that era of Toronto’s history and the dialogue was excellent.  There were a few slow spots, but I could forgive those.  Having the hindsight of reading a few more in the series before writing this review I can honestly say the books improve with each addition to the series.

The cover of the book is a bit deceptive as it pictures the characters from the television series.  For fans of the series – be forewarned – the book is similar but definitely not the same.  While the show is often humorous and tongue-in-cheek the book is deadly serious (pun intended).  I did particularly enjoy the more in-depth look into Murdock’s life away from the police station.

“Except the Dying” is well worth the read and I’m giving it 3.5 stars because I know the series improves in subsequent books.

Born in England, Maureen Jennings taught English before becoming a psychotherapist.  “Except the Dying” was published in 1977 followed by 6 more books in the series.  Three of her novels were adapted into movies of the week and four years later Shaftesbury films created the Murdock Mysteries television series.

Maureen lives in Toronto with her husband and their two dogs.