The Hidden Keys - A Review

After I read “Fifteen Dogs” several years ago Andre Alexis became on author on my “need to read more by him” list.  If you saw my TBR you would understand why that hasn’t happened until now.  When I read about the release of this book in 2016 I knew I wanted to pick it up.  It took me this long to get to it.  Shame on me!

THE HIDDEN KEYS by Andre Alexis 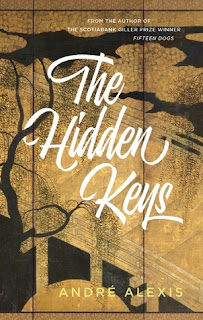 Tancred Palmieri is an enigma – an honourable thief who also happens to have a detective as a best friend.  He lives in and mixes with the people in a shadier area of Toronto, not somewhere you would expect to meet Willow Azarian, a billion dollar heiress with a not so secret heroin addiction.  Tancred knew nothing about Willow but she knew him by reputation.  A chance(?) meeting sitting on the bar stools in a dive bar prompts them to start a conversation.  Tancred took Willow to be what she appeared, a slightly eccentric addict with possibly delusions of grandeur – until she shows him her “mad money” bank book containing a 6 figure balance.  After saving her from some thugs Willow tells Tancred a fantastic story about a treasure hunt her father arranged for her before he died.  Each of the five Azarian siblings received an unusual gift bequest in their father’s will.  Each gift individually was simply a memento but combined they were an intricate series of clues.  Willow is convinced there is a pot of gold at the end of the hunt but her siblings believe otherwise.  Willow wants Tancred to steal each of their mementos and help her solve the puzzle.  He gives his word and Tancred is nothing if not a man of his word even when it means completing the task without Willow’s help.  He quickly finds out that others are also on the same quest but is he on the mother of all treasure hunts or the wildest goose chase of his life?

As he did in “Fifteen Dogs” Mr. Alexis gives his reader an extremely entertaining story. This one is filled with eccentric characters from all parts of the economic spectrum, he gives us moments of almost slapstick humour and at other times nail biting suspense, all combining to ask the reader to question what the true meaning of family, friendship and promises might be.  Amazingly enough he does this in an unobtrusive way.  Never obviously preaching the subtle undertones, it wasn’t until I read the last page and closed the cover that it occurred to me how meaningful this entertaining story really was.

If I was pressed to find fault with the book I would have to admit that in one or two instances it dragged a little, more than likely because I was impatient to find out if there was a treasure.  It was fun to read a book set in Toronto, a city I know well so it’s still five stars for this one.  Mr. Alexis hit another one out of the park.

ABOUT THE AUTHOR (from the Wikipedia) 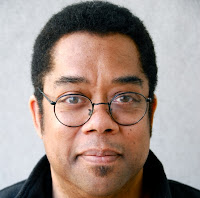 Andre Alexis was born in Trinidad and grew up in Canada.  His debut novel, Childhood, won the Books in Canada First Novel Award and the Trillium Book Award, and was shortlisted for the Giller Prize.

Alexis began his artistic career in the theatre, and has held the position of playwright-in-residence at the Canadian Stage Company. His short play Lambton, Kent, first produced and performed in 1995, was released as a book in 1999.  His first published work of fiction, Despair and Other Stories of Ottawa (1994), was short-listed for the Commonwealth Prize.
Alexis published Ingrid and the Wolf, his first work of juvenile fiction, in 2005. Alexis wrote the libretto for James Rolfe's opera Aeneas and Dido, which premiered at Toronto Masque Theatre in 2007.  His novel Asylum was published in 2008, and is set in Ottawa during the government of Brian Mulroney.  Fifteen Dogs, was published in 2015 and won both the Giller Prize and the Rogers Writers' Trust Award that year. The third novel, The Hidden Keys, was published in 2016.

In 2017, Alexis was announced as a juror for the 2017 Scotiabank Giller Prize.

Alexis lives and works in Toronto, where he has hosted programming for CBC Radio, reviews books for The Globe and Mail, and is a contributing editor for This Magazine.
Posted by Unknown at 2/23/2017