Visions of Genius - A Review 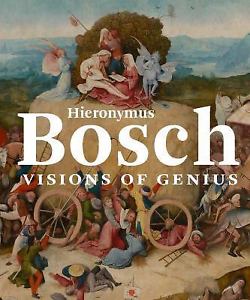 If you find yourself fortunate enough to be in a gallery standing in front of a Hieronymus Bosch painting I think it would be safe to wager that you would be bent at the waist with your nose as close as possible – without attracting the ire of the security guards – to the painting, quite possibly scratching your head in either wonderment or bewilderment.  Bosch is well known for adding whimsical items to even his most serious works of art.  He randomly adds machinery, wild imaginary and mythical creatures, and hybrids of both man and animals.  Lavish landscapes are dotted with fanciful items and, more often than not, owls.  Even his human figures sport exaggerated features and are frequently participating in lewd behavior.

“The Garden of Earthly Delights” is quite probably his most well-known painting (triptych) and I’ve often wondered if Bosch was “having one over” on his potential audience? 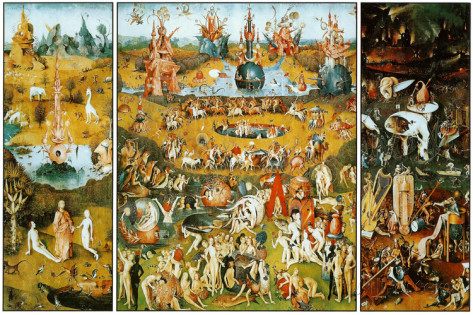 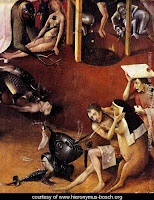 When I saw this book offered on Netgalley I knew I wanted to learn more about the why behind the paintings.  The authors attempted to explain that elusive “why”, and they did an admirable job – unfortunately not much is known about Bosch.  Unlike other historical figures Bosch left behind no diaries or correspondence.  Everything gleaned about his personal life has been learned through municipal records in his birthplace of ‘s-Hertogenbosch.  Born Jeroen Anthonissen van Akeniwas; his actual date of birth is merely speculation, estimated to be around 1450.   Public records indicate that he was married while children are also a question mark.  He died in 1516 and was buried on August 9th.  Really, it’s not much to go by when one is writing a book about his life, so kudos to Ilsink and Koldeqeij for undertaking this task to mark the 500th anniversary of his death.  A retrospective exhibition was held in his home town of ‘s-Hertogenbosch bringing together more that fifty works of art that are held in 25 collections spread across 10 countries.  This book is a result of extensive research, scientific testing and scholarly discussion that took place during the exhibition. 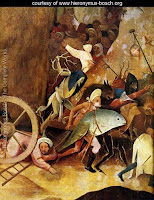 After I read the forward by the authors I was a little intimidated to start this book and must admit to looking at the illustrations and pictures and then putting it aside for a little while.  When I finally delved in clear writing pleasantly rewarded me, there was none of the “art-babble” sometimes included in such books.  Each section of the book is accompanied by the work of art it describes and then smaller detailed pictures of specific sections of the work are on the following pages.  It was an easy book to follow and I now have a slightly better understanding and significantly more appreciation for Bosch’s art.  Could it be possible that I am finally creeping out of my “impressionist fan” box?  Maybe not too far though – I think Bosch was a bit of a rebel in his time too. 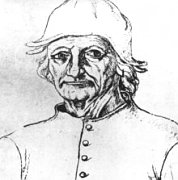 So while not so much as a self-portrait remains of this painter (only a pencil sketch speculated to be Bosch) and the fact that he very rarely dated or signed his paintings (resulting in mere 25 works definitively attributed to him) he remains a baffling artist.  My only regret is that I had a digital copy of this book rather than a beautiful hard cover as I think the electronic version did not due the pictures justice.  Despite that this book did what I wanted it to do – it made sense of some of the bafflement.  For that, I give it 5 stars.

I would like to thank the publishers, Yale University Press & Mercatorfonds,
for providing me with a free copy of this book via Netgalley in exchange
for an honest review. 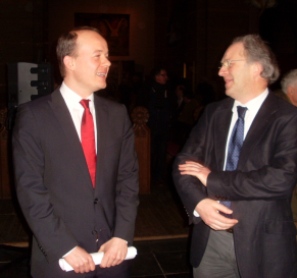 Matthijs Ilsink is project coordinator of the Bosch Research and Conservation Project and teaches at Radboud University, Nijmegen. Jos Koldeweij is professor in art history of the Middle Ages at the University of Nijmegen, the Netherlands.

Jos Koldeweij is Professor of Art History at Radboud University Nijmegen, an expert in the work of Jeroen Bosch and initiator of the Bosch Research and Conservation Project (BRCP). He is in charge of the research project and, together with Matthijs Ilsink, curator of the Jheronimus Bosch – Visions of Genius exhibition.
Posted by Unknown at 6/10/2016