The Good Sister - A Review

THE GOOD SISTER by Chelsea Bolan 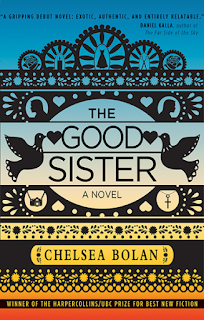 Raul Amador told himself that everything he did was for the good of his family.  After all, didn’t he move them from the poverty, squalor and dangers of Mexico City to the prosperity, peacefulness and safety of Santo Nino?

For Raul Amador family was everything.

Or maybe it was honor above everything? – the idea that he could hold his head high while tending to his bar full of tourists or walking through town.  Why else would he have been able to banish his 14 year-old daughter, Gabriela, on the basis of rumor?  That was the day Lucy lost not only her sister but also her best friend.  She thought she couldn’t do anything about at the time but when the after shocks of her father’s decision cracked the foundation of her life and family she set out to find her sister.  Through the slums and red-light districts of Mexico City to the “gringolandia” of San Diego she searched everywhere.  Would she ever find her sister again?  And if she did, could she even begin to ask for forgiveness for doing nothing?

“The Good Sister” is in turns heartbreaking and heartwarming, frightening and comforting, full of suspense and danger and then love and redemption.  Ms. Bolan has created a gritty yet wonderful world populated by both truly hate-worthy characters and, while not always traditional, equally truly loving and warm characters.  Lucy’s quest to find her sister is believable and I found myself cheering for her whenever something went right and despising those who made her journey more difficult.  Ms. Bolan managed to grab hold of my emotions from the first page and not let go.  Then I felt her squeezing just a little tighter, if that was even possible, when Gabriela’s whole story was finally revealed at the end of the book.  Well done for a debut author!

Told in both the first person for Lucy’s story and third person for the rest worked well for this book.  “The Good Sister” explores so many themes relevant today – some politics, male/female double standards, tradition versus more modern norms – the list goes on, yet Ms. Bolan managed to combine them all into central plot that had me anxiously turning pages whenever I could get a few minutes to sit down with the book.

This book made me think of “The Kite Runner” and “The Almond Tree” because it has also stayed with me for a while after turning the last page.  It too asks the age-old questions “Can you be good again?”  “Can you really go home again”?  Since both Lucy and Gabriela took turns breaking and mending my heart as I read, my only dilemma was deciding which of the two sisters the title refers to?  Which one is “The Good Sister”?

I have to confess to a case of cover love for this book too.  The cover so perfectly captures the Mexican setting and after finishing the book I realize that not one of the small illustrations is wasted.  Just looking at the cover brings special parts of this book quickly back to mind.

Definitely a 5-star read for me.

I would like to thank Harper Collins and First Look Books for providing me with a copy of this book in exchange for an honest review. 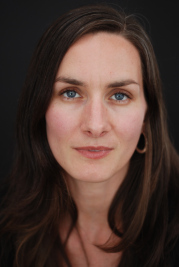 Chelsea Bolan writes a lot about people who long for alternate worlds where they would better belong.  In the meantime, they make kites, change genders, play piano, stalk flautists, jump off bridges, and dream of UFOs. Her work has appeared in The Kenyon Review (online), Seattle Weekly, CutBank, Fourteen Hills, Borderlands, Poetry Northwest, Bayou, and other publications.

Born in Spokane, she earned a Bachelor of Arts in English Literature from the University of Washington and an MFA from the University of British Columbia in Vancouver.  In 2010 she was Artist-in-Residence at Milkwood International in Český Krumlov, Czech Republic, and in 2011, she was awarded a GAP grant (Grants for Artist Projects) from Artist Trust to work on short stories.

The manuscript of her first novel, The Good Sister (formerly In the Place of Silence), won the 2014 HarperCollins/UBC Prize for Best New Fiction, and will be released by HarperCollins Canada June 21, 2016.
Posted by Unknown at 6/17/2016