The Curious Charms of Arthur Pepper - A Review

THE CURIOUS CHARMS OF ARTHUR PEPPER by Phaedra Patrick 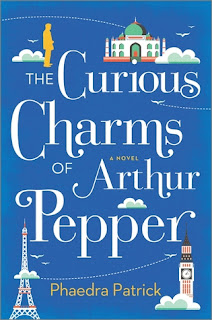 Arthur Pepper is a sixty-nine year old widower whose life is governed by schedules.  He gets up at the same time every morning (7:30), dresses in his grey slacks and mustard yellow sweater vest (his late wife liked it) and tends to Frederica (his fern).  The rest of his day is spent in a combination of three past times – watching television, sitting in his garden and/or avoiding his neighbor, Bernadette, with her endless gifts of food and baking.  However, today is different.  Today is the first anniversary of his wife’s death and he has tasked himself with finally going through her things to clear them out of the house.  He is not looking forward to this chore he has set for himself but is determined to do a thorough job.  That’s how he finds the mysterious charm bracelet tucked inside one of his wife’s boots.

The charm bracelet is – well – charming and obviously expensive.  He knows they could never have afforded such a thing and he cannot recall his wife ever wearing it.  So what was it doing tucked away inside her boot?  Curiousity gets the better of him when he notices a number that could be a telephone number engraved on an elephant charm.  He dials the number and sure enough it rings through to India and so begins his “epic quest” to find out what each charm symbolizes and what they can tell him about his wife’s life before she met Arthur.

This book was an absolute pleasure to read.  The characters are lively and a little over the top, a combination that makes them eccentric and very  “charming”.  Arthur’s adventures are equally lively and over the top.  The reader quickly moves from feeling very sorry for Arthur and his somewhat self-imposed solitary life to cheering him on in his travels and discoveries.  From elephants in India, tigers in England, unmentioned friends in Paris and an embarrassing university art class Arthur does uncover his wife’s “secret” past but he discovers so much more about himself and those around him.

Ms. Patrick’s (dare I say it again?) charming debut book makes a perfect summer read that will allow you to escape into Arthur’s world for a little while … a little story-cation that is definitely worth five stars.  I look forward to seeing more from Ms. Patrick if this is any indication of stories to come. 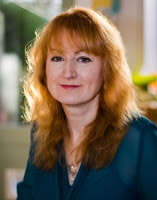 Phaedra Patrick studied art and marketing and has worked as a stained glass artist, film festival organiser and communications manager. An award-winning short story writer, she now writes full time. She lives in Saddleworth, UK, with her husband and son.

The Curious Charms of Arthur Pepper is Phaedra Patrick's debut novel with translation rights snapped up in 18 countries worldwide.