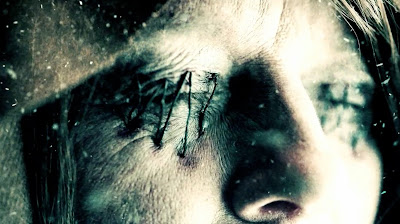 Noun:  A witch or a caster of spells

Verb:  To put a spell on, to affect as if by an evil spell (jinx, curse) 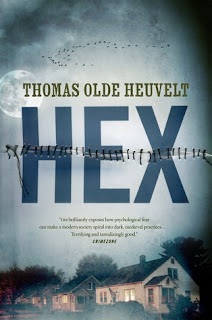 Having seen the reviews about this book I was quite excited when I got the notice from the library that my copy was available for pick-up.  I wanted to like this book!  I really, really did!  I mean it had a small town with an evil curse – residents unable to leave for more than short periods of time without becoming suicidal, it had a centuries old witch – with her eyes and mouth stitched closed, no less, what was not to like?

Alas, I found it to be a little bit of a disappointment.

In her time Katherine van Wyler was a recluse, living just outside of the town proper.  Maybe she was a bit eccentric.  People talked and speculated and pointed fingers.  As was so often the case, innocents being persecuted for being different, she was branded as a witch and dealt with accordingly.  It seems in Katherine’s case the town’s folk may have been right because “The Black Rock Witch” still inhabited the town some 300+ years later.  She had a certain path she took into and out of town, but randomly appeared in people’s homes for unknown reasons and stayed until she decided to go elsewhere.

When she appeared at the home of Tyler and his family she simply stood quietly in a nook in the livingroom while the family went about their daily lives.  They could not bear to look at her, so placed a tea towel over her head.  That image did me in.  No matter what took place after that, the image of the evil witch standing there with a tea towel over her head never left me and it colored the rest of the book.  In fact the first few chapters gave me the impression that this book was not one to take seriously … at times I found I was chuckling to myself.

Yes Tyler, a teenager with a GoPro and a blog, his friend with the nasty streak and a woman obsessed with befriending Katherine for her own gains and the hard won peace between Katherine and the town becomes tattered.  The excellent writing and the depiction of the town falling into mob rule is what kept me reading, but even that wasn’t enough as I found by the end of the book I was disgusted by the town and its inhabitants. I cared about what happened to Tyler and his family but a big part of me was rooting for Katherine to come out the victor – tea towel and all.  I don’t usually find myself cheering on the evil entity in a horror book so I have to conclude this one just didn’t push the right buttons for me.

I’m rating “Hex” at 3 ½ stars.  The extra half being given because there were some clever “easter eggs” in the character names and the author did a respectable job explaining how the curse could be kept secret in the 21st century. 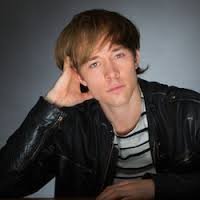 Thomas Olde Heuvelt is a Dutch writer whose horror novel HEX has been sold to nine languages in fourteen countries, among them US, France, China and Brazil. His short stories have received awards like the Hugo Award for Best Novelette, the Dutch Paul Harland Prize, and has been nominated for two additional Hugo Awards and a World Fantasy Award.

Olde Heuvelt was born in Nijmegen, Netherlands. He studied English language and American Literature at the Radboud Universiteit Nijmegen and at the University of Ottawa in Canada, where he lived for half a year. In many interviews, he recalled that the literary heroes of his childhood were Roald Dahl and Stephen King, who created a love for grim and dark fiction. He later discovered the works of a wider range of contemporary writers like Jonathan Safran Foer, Carlos Ruiz Zafón, Neil Gaiman and Yann Martel, whom he calls his greatest influences
Posted by Unknown at 6/29/2016