I've finally got the time (and found the mood) to tackle my backlog of reviews.  Sometimes I just don't feel like sitting down and getting my thoughts onto the screen ... I'd much rather just tuck into the next book. 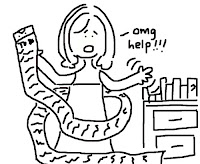 I read these three books almost back to back so I thought why not review them together.  I have a few others books waiting to be posted that also share authors, so I may use this idea to get them done and on here too.

They do get a little lengthy so pick and choose which to read at your own discretion. 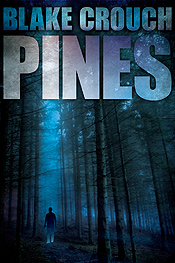 Ethan Burke remembers being sent to Wayward Pines to investigate what happened to his former FBI partner (and ex-lover) who mysteriously disappeared.  He remembers a horrific car accident happened within minutes of crossing the town line.  The next thing he knows he awakens in the Pines hospital without his wallet or cell phone.  He is told he survived the accident but his current partner, traveling with him, was killed.  Frantic to get in touch with his wife and son, his boss or anyone else outside Wayward Pines he soon discovers he can’t … something is very wrong in this little town that seems to have only one road in and no road out.

This book had me hooked from the first page.  As Ethan becomes more and more frantic trying to get to truth behind what is going on in Wayward Pines, the reader follows him step by step.  Ethan’s anxiety and frustration were palpable through the pages.  The writing and the action are quick.  This certainly was a page-turner.

... Because as much as it kept me on the edge of my chair for most of it, there were a few sections that had me scratching my head.  I knew this was not a time travel book and yet some references to time that seemed warped had me confused.  This problem receives a little bit of attention in the conclusion, but I am still left with questions.  All right – expected since it is only Part One of a trilogy. 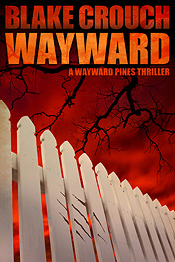 In this, the second installment of “The Pines” trilogy, we rejoin Ethan Burke.  He has seen the wizard behind the curtain AND the world beyond the electrified fence so he is a little clearer about his situation.  Despite still having apprehensions about the concept of the town he knows that staying there might be the only hope for its residents.  In hopes of somehow making the town a little more bearable for both his family (with whom he is now reunited) and the other residents he has accepted the job of being the new sheriff.  Ethan still does not trust mastermind, David Pilcher – but must firmly believe in the saying “keep your friends close and your enemies closer” – it seems like the only way to save the town.  Ethan definitely has an agenda … the reader is just not too sure what it is.  And, who is this mystery man roaming beyond the fence?

As in the first book Mr. Crouch has given me an (almost) “one sit” read.  Once I started on this book I didn’t want to put it down.  Once again Mr. Crouch has raised my anxiety level with his writing … I was right there with the characters feeling their fear, uncertainty and confusion.

... Because this one ended with a hell of a cliffhanger.  Normally I would be upset with a cliffhanger ending, but this one was just supreme, so I have to give credit where credit is due.  Mr. Crouch definitely left me uttering that “Nooooooo!” when I turned the last page in this book.

THE LAST TOWN by Blake Crouch

Wayward Pines can no longer be described as Paradise.  It’s gone to hell in a hand basket … no one is safe when the fence comes down and everyone’s worst nightmares are realized.  Ethan is feeling immense guilt because he brought this on, but let’s be honest, it was Pilcher who turned off the electric fence … the destruction of Wayward is on him.  But, why??

No more secrets in this conclusion to the Pines trilogy.  Theresa tells Ethan about her life before he came back, the residents see first hand the truth about their little Utopia and “god” seems to have turned into the devil.  The reader is finally given the inside scoop on how the residents of Wayward “arrived” and who exactly the wanderer is.  The trilogy certainly reaches it’s crescendo with this book.

Two little yellow guys on this one only because I have not been so angry about the ending of a series since Mr. King gave me “Ka is a wheel” (Dark Tower series).  I was happily reading along, nodding my head (yup, I could sort of see where this was going), not really paying attention to the actual number of pages left to read.  And then – I turned the last page (cue dramatic music) – I read the last line, and then I read it again, and then I closed the book, and then I opened it again, and then I read the last line again.  Oh, for f*** sakes!  Sorry … was that the sound of the book being thrown onto the floor?

I’ve had time to think about it since then.  Now, don’t get me wrong, my personal reaction has not mellowed any, but I’ll concede MAYBE it was rather brilliant on Mr. Crouch’s part; there can either be another (Dear readers, I apologize for the last book's ending … here you go) book for readers like me who have to know what the author conceives happened or readers can make it up for themselves.

All that being said, it was a good trilogy and I would not hesitate to recommend this book to anyone wanting to escape to Wayward for a little while.

OVERALL RATING FOR THE TRILOGY 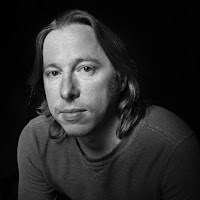 Blake Crouch has sold over a million books and his work has been translated into more than twenty languages. Known for high-concept fiction with breakneck pacing and groundbreaking genre cross-breeding, six of his books have hit the Kindle Top 10, and two have reached the #1 spot. His short fiction has appeared in numerous magazines and anthologies, including Alfred Hitchcock, Ellery Queen, Cemetery Dance, and Thriller 2, edited by Clive Cussler.

In 2013, his novel Pines was nominated for ITW's Best Paperback Original Thriller Award, and his Wayward Pines series has been made into a TV series which is currently airing on Fox International Channels, directed by M. Night Shyamalan and starring Matt Dillon, Juliette Lewis, Melissa Leo and Terrence Howard. He has been featured in Time Magazine, the L.A. Times,The Wall Street Journal, and Entertainment Weekly.