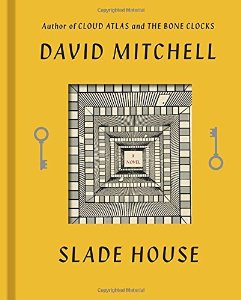 Slade House is mansion that stands down a narrow, dark alley in a working class part of London.  Those who know of it always think that it is very out of place.  Those who visit it find it’s garden enchanting, it’s hosts charming and the food better than any ever tasted before.  Those few never want to leave … then they do – desperately … none do.

Slade House is a short novel told in five vignettes.  Each part is told from the perspective of a different character.  Each telling gives the reader a little more information about what is actually going on in Slade House.  None of what we learn is good!  When we meet and get know the inhabitants of Slade House, brother and sister twins Norah and Jonah Grayer, things start to fall into place.

Despite the fact that this book is written in what amounts to five separate stories Mr. Mitchell manages to write so that it all blends together quite seamlessly.  As each story began I foolishly hoped that this time it would be different; this time the visitor would best the twins.  It was not to be.  The author certainly kept me on a roller coaster of belief, hope and then despair for the victims, each consecutive story amplifying that sensation more and more.  That was some excellent writing.  As the final vignette began I was drawn in once more.  I was having that “boy who cried wolf” feeling and swore I would not get my hopes up again.  I needn’t have worried.  Mr. Mitchell did a superb job of keeping me in suspense and not so blissful ignorance.

The final outcome?  Let’s just say I could have screamed – and not only in horror.

As thoroughly as I enjoyed this book one drawback for me was the use of what I can only describe as “mystic psycho-babble”.  I got so bogged down in the names for the various locations and “rites” that I found myself concentrating more on the vocabulary than the narrative.  It resolved itself in the end and didn’t lessen my angst about what was happening but it was distracting.

As my last official “Halloween Read” for this year I’ll call it a very well written and frightening story.  The concept behind the evil was original and despite the “mystic psycho-babble” I “got it”.   Four ghosts for this one. 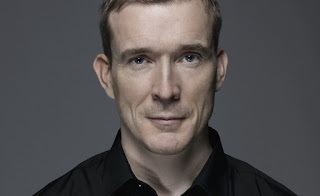 ABOUT THE AUTHOR (from Amazon)

David Mitchell is the award-winning and bestselling author of Slade House, The Bone Clocks, The Thousand Autumns of Jacob de Zoet, Black Swan Green, Cloud Atlas, Number9Dream, and Ghostwritten. Twice shortlisted for the Man Booker Prize, Mitchell was named one of the 100 most influential people in the world by Time in 2007. With KA Yoshida, Mitchell translated from the Japanese the internationally bestselling memoir The Reason I Jump. He lives in Ireland with his wife and two children.

And now Hallowe'en is over for another year.