Prince of Darkness - A Review

PRINCE OF DARKNESS by Shane White 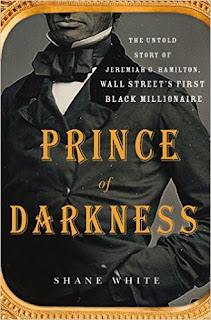 Jeremiah G. Hamilton was man of mystery.  No one is sure where he was born – was it Virginia or Haiti – even he himself changed the story as it suited.  His questionable start in business – passing counterfeit money in Haiti put a price on his head on that island.  Defrauding insurance companies over boat accidents, buying and selling property with bad notes and airing his grievances in court and the newspapers made him notorious in America.  It also made him a millionaire in New York City in the early 1800’s.  A feat not easily accomplished.

Made even more rare by the fact that Jeremiah G. Hamilton was black.

New York City in the early 1800’s was a city in which great changes were taking place.  Always tolerant and supportive of abolition, New York was now a favorite destination for newly freed slaves.  The value of paper money was questionable since each bank printed its own version.  Property values rose and fell seemingly on a whim, newspapers influenced the thinking of the people and the courts were used for everything from the theft of a 25-cent purse to property fraud and non-payment of debt.  Everything was in chaos and Jeremiah G. Hamilton used that all to his advantage earning him the nickname “The Prince of Darkness”.

Taking all that into consideration not much is known about Jeremiah G. Hamilton outside of newspaper articles and court records.  Despite the fact that he own many properties in the area of what is now Manhattan as well as property that would now be at the edges of Time Square (arguably one of the most expensive pieces of real estate in the world) there is not so much as a plaque commemorating his contributions.  He left behind no diaries and no personal correspondence.  He shocked society be taking a 14-year-old white girl as his wife.  As the author himself writes, “Jeremiah Hamilton was a racist’s nightmare come to life” yet even that has barely made a ripple in the pages of history.  We do not even know what the initial G. in the middle of his name stood for.

That was the question Shane White posed to himself.  Utilizing his years as a researcher he hoped to find the answer.  Mr. White set a rather formidable task for himself and this book is the result of his research.

When I picked up this book I was expecting a biography of an individual who defied the odds, legally or not, to become known as “Wall Street’s first black millionaire” yet that is not exactly what I received.  What I read instead was the tidbits that are known about Jeremiah G. Hamilton interspersed with a very well written history of “Gotham” in the years following the Civil War and emancipation; Jim Crow was explained in a way I never clearly understood before; the toll of the fire of 1835, which I have read about in works of fiction, was brought into clear perspective.  Included also, were some other personalities of the time period both white and African American.  Definitely an enjoyable read despite the fact that it was not quite “as advertised”.

… “the notorious colored capitalist long identified with commercial enterprises in this city is dead and buried”.  Has there ever been another occasion when someone has considered a black man to be synonymous with New York Commerce?  The Prince of Darkness was indeed a remarkable man, and it would be some time before New York City would see his like again.”

I would recommend this book as an informative read for anyone interested in this time period or in the history of New York City.  I particularly enjoyed reading about the tremendous stride the African American citizens made through their determination, hard work and, sometimes, sheer cleverness to establish themselves after emancipation. Mr. White touches on everything from the Haitian revolution to the rebellious acts against Jim Crow.  So why just a 4-star rating?  Sadly, having little to go on researching Jeremiah, the citing of the court cases was a little repetitive and, in my opinion, took up a little too much of the book.  It would have been a solid history without them.

ABOUT THE AUTHOR (from The New York Society Library) 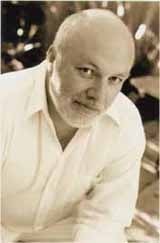 Shane White is the Challis Professor of History and an Australian Professorial Fellow in the History Department at the University of Sydney, specializing in African-American history. He has authored or co-authored five books including Playing the Numbers and collaborated in the construction of the website Digital Harlem. Each project has won at least one important prize for excellence, from institutions as varied as the American Historical Association and the American Library Association. He lives in Sydney, Australia.