I’m always on the lookout for a good horror story so when I got the email that I’d won a copy of this one I was quite excited to read it.  I’ve read a few other novellas by Mr. Cassidy and, like those, this one did not disappoint. 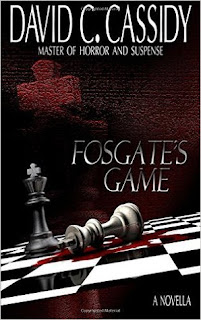 Chadwick and Fosgate were business associates but that was all they had in common.  Fosgate is a hunter, a brute, insensitive to other people’s feelings, concerns and fears.   Chadwick was more sensitive – his ulcer flares up when he is in Fosgate’s company, the hunter’s trophies on the wall disturb him and thunderstorms are a phobia – and tonight’s dinner did indeed take place a very dark and stormy night.  Chadwick understands that Fosgate takes a perverse sort of joy playing on his fears but it cannot be helped; these ongoing evenings are a necessity of doing business.

But this night is different.

This night Fosgate shares a mysterious secret about an object he picked up in his travels, a chess set with pieces so grotesque Chadwick could not comprehend why and who would have carved them.  The set should have stayed hidden in it’s case.  It emanated evil, but worse; Fosgate wanted to play!

This book had me in its grip from the first page.  Chadwick’s fear and loathing of Fosgate was palpable and as the evening and Chadwick’s discomfort progressed so did mine. Since I don’t care for Jason and Chainsaw “slasher” type horror finding a good old-fashioned scare seems few and far between these days.  Rest assured there is still the requisite amount of mayhem, death, blood and gore but Mr. Cassidy does not feel the need to slap you in the face with it … one quick mention and the rest is left to the readers imgination … like some of the masters of the genre he understands that this reader does not need to feel splattered in blood to feel fear.  How does it all turn out?  Satisfyingly twisted thank you very much!

I’d like to thank Mr. Cassidy for providing me with this book through a contest
with no expectation of a review.

ABOUT THE AUTHOR (from amazon) 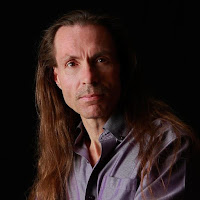 Award-winning author David C. Cassidy is the twisted mind behind several best-selling novels of horror and suspense, including The Dark, Velvet Rain, and Fosgate's Game. An author, photographer, and graphic designer--and a half-decent juggler--he spends his writing life creating dark and touching stories where Bad Things Happen To Good People. Raised by wolves, he grew up with a love of nature, music, science, and history, with thrillers and horror novels feeding the dark side of his seriously disturbed imagination. He talks to his characters, talks often, and most times they listen.

But the real fun starts when they tell him to take a hike, and they Open That Door anyway. Idiots. David lives in Ontario, Canada. From Mozart to Vivaldi, classic jazz to classic rock, he feels naked without his iPod. Suffering from MAD--Multiple Activity Disorder--he divides his time between writing and blogging, photography and Photoshop, reading and rollerblading. An avid amateur astronomer, he loves the night sky, chasing the stars with his telescope. Sometimes he eats.