Susan Morrow is comfortable in her second marriage; although it’s not perfect she enjoys her home and her children.  She tells herself this is the life she wants.  Her first marriage to Edward Sheffield was filled with her encouraging him to write and Edward making excuses.  She hasn’t thought about Edward in years and then all of a sudden a manuscript arrives in the mail with a letter from Edward asking her to read his book.  Susan waits until she has some quiet moments and then begins the book about some … 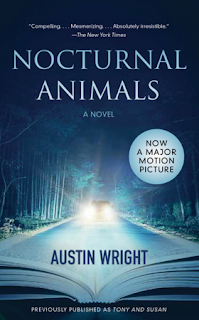 Susan is quickly drawn into the fictional life of Tony Hastings and his family.  On an ordinary drive to their summerhouse in Maine the unimaginable happened.  At first Tony is left emotionally paralysed by the violence done to himself and his family.  Slowly, he comes to terms with the fact that it happened but is unexpectedly drawn in to the often unexplainable quest for judgement both he and the local police seem to need in closing the case of what happened to Tony and his family.

“Nocturnal Animals” is a book within a book that seemed like an interesting concept when I first read about it.  The first part of the book held my interest because I got caught up in Susan’s excitement at digging into the manuscript.  I could relate to her wanting a quiet place and a set time frame to do the book justice.  Reading along with Susan I was as shocked as she was at what was happening to the Hastings family.  When Susan had to close the manuscript to address her life (which I very quickly became bored with) I, like Susan, couldn’t wait to get back to the manuscript.  Unfortunately that feeling really didn’t last much past the first third of both the book and the book within the book.

I can’t say the writing was horrible – I’ve read worse – but the editor was asleep at his job on this one.  This book was previously published under the title “Susan and Tony” so you would think this being the second go round the errors might have been caught?  There were sentences that I had to read two and three times and still couldn’t make sense out of them.  I just moved on hoping I didn’t miss some important piece of information.  This does not endear me to the book I am reading.

I also kept waiting for the book to fulfill the promise in the cover description, “Susan is plunged into the past, forced to confront the darkness that inhabits her and driven to name the fear that gnaws at her future and will change her life.”  Yeah – didn’t happen.

So why did I keep reading?  There was an underlying sense that this book was going to surprise me with a big reveal at the end.  I was optimistic that my fortitude would pay off.  It didn’t.  The ending I was expecting never materialized and in the case of both books I was left disappointed.

I’m giving this one 2 stars because the first third was, aside from the editing, interesting.  It was too bad the rest didn’t live up to the hype.  This book has been made into a movie.  I may watch it if it ever makes it to the small screen but doubt I’ll go out of my way to do so.

ABOUT THE AUTHOR (from the Telegraph) 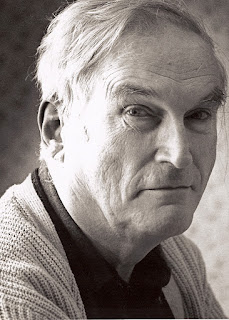 Austin Wright, an American novelist and English professor who died in 2003 at the age of 80. Despite having been praised by the likes of Saul Bellow, he remained little known in his lifetime.

Between 1969 and 1977, Austin Wright wrote three experimental novels – Camden’s Eyes, First Persons and The Morley Mythology – all of which played with ideas about fiction and narrative voice. The protagonists wake up to discover they are characters in novels, or hear voices in their head so fully fledged they have real names. There are books within books and minds within minds. While the action is pulpy – sex, blackmail, murder, suicide – the context is mundane, typically involving a mild-mannered, middle-aged academic. (Katharine Wright remembers being “freaked out” by the violence in her father’s books: “It was such a leap from the man, who was very sweet and shy, to these crimes.”)

‘He was interested in how the mind works,” Katharine Wright says of her father, “how it fools itself and how it tries to rationalize things.” Wright was an inveterate player of games and puzzles – at Christmas in 1974, he waited until everyone had opened their presents, then gleefully pulled out from behind the sofa a newly invented Rubik’s Cube he had bought and wrapped for himself. He was also a compulsive recorder of facts. On long car journeys, the rest of the family would tease him about all the information he had noted in his journal: where they stopped for petrol, what they ate and so on.
Then, at the end of his life, his unique brain seemed to unpack itself, as if his most artful patterns of thought were spilling out uncontrolled. “Some horrible thing happened in his mind,” Katharine recalls. Doctors thought he might have Creutzfeldt-Jakob disease, though an autopsy later proved that wrong; the cause of Wright’s death remains a mystery.
Posted by Unknown at 2/18/2017