I've mentioned it before, I'm writing about it now and, if you stick around, it will probably come up sometime in the future too.  I hate bugs!  It’s not a paralyzing phobia, I reserve that for visits to the dentist, it’s just that creepy, crawly feeling of “ICK”.  Have you ever been sitting somewhere, indoors or out, and suddenly a spider drops down on its single strand of silk like Tom Cruise in Mission Impossible?  There’s that moment of disbelief followed quickly by the paralyzing second of absolute uselessness because you’re not sure what to do and then, channeling your inner Little Miss Muffet you make a run for it.  And, of course there is the spider that you see scurrying across the floor or up the wall.  You turn your head for a split second to grab something to squish it with and when you turn back it’s gone.  Worst feeling ever!  Okay, okay, maybe not EVER, but its up there in the top ten seven five, yeah five.

I don’t always squish bugs when I see them.  I once walked into the bathroom at work, turned on the light and saw a cricket scurry towards the baseboards.  The poor little thing was so frightened it was trying, very unsuccessfully, to hide itself.  There was no way I could stomp on it and squash it.  I picked up an empty bathroom tissue roll, plugged one end with a paper towel and, anticipating the necessity for a quick maneuver, I had another wad of paper towel in my other hand while I scooped the cricket into the tube.  I took it outside onto a patchy piece of grass, wished it well and let it go.  Best-case scenario, the cricket would not be eaten by the next bird that flew by and the whole episode would grant me some good Karma in future dealings with insects.  Good Karma I might possibly need in light of an article I came across recently. 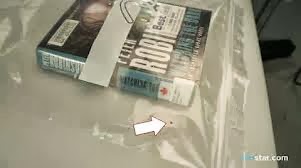 murder mystery in bed one night when suddenly a bug crawled out of the spine of the book.  The brown bug was “the size of an apple seed”.  If that had happened to me I would have dropped the book and started jumping around like River Dance on fast forward.  Peggi-jean, obviously a more rational soul than myself, “made sure the suspicious insect got well-acquainted with the heel of her foot”.  Her suspicions about the nature of the beast were confirmed when two more bugs made their way out of the book.  Not wanting to take any chances she immediately placed the novel and its gruesome contents into a Ziploc bag and, no doubt, sealed it tightly.  The book had been borrowed from her local branch of the library. 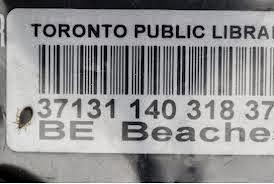 I am quite sure this is not the type of publicity libraries care to have, but bad news for the library PR department, as it turns out Peggi-jean’s husband, David, is a photographer for the Toronto Star newspaper.
Bed bugs have been known as human parasites for thousands of years.  Wikipedia states that at a point in the early 1940’s they were mostly eradicated in the developed world, but have increased in prevalence since 1995.  Although bed bugs can be found singly, they tend to congregate once established.  Understanding how quickly bed bugs can become an infestation the Toronto Star sent a team of its reporters to find out the full extent of the “book bug” infestation.

To quote from the article:

“In 2010, bed bugs were first reported at the Toronto Public Library’s Parliament, Yorkville, and Reference Library branches.  It turns out that female bedbugs can lay their eggs in the spines of hard-cover books … However, as the parasites feed exclusively on human blood, it’s difficult for them to survive on a bookshelf for long, so most are found in books that are heavily circulated – such as the one written by Mr. Robinson.”

Great!  I use my library A LOT!  I've always given myself a little pat on the back because, through various sources, I get the heads up on release dates for my favourite authors and reserve the books I don’t plan on purchasing through my library’s website.  Often, depending on the quickness of other equally informed library users, I am the first or second person to receive the book when the library puts it into circulation.  It’s not reassuring to know that heavily circulated books may be the most likely to be infested.  My skin is crawling as I type this, but in the spirit of warning other unsuspecting library patrons everywhere … I soldier on!

The article went on to say:

“Finding a bed bug in a book is rare: in 2012, the library had 24 confirmed bed bug cases; to put that number in perspective, Toronto’s public library system has 1.2 million members and an annual circulation of 31 million items.  Moreover, the library has excellent preventative measures in place to ensure that scenarios like this don’t happen often.  Each and every book that is returned to the library is first visually inspected, and if a book or item looks suspicious, staff will seal the book.  Should a book have bed bugs, the library will not hesitate to destroy the book.”

Methinks the library doth protest too much.  Not wanting to necessarily call the official line of the Toronto library a bit of a crock, I have personal experience that does not bode well for veracity of the “each and every book … is first visually inspected”.  Granted, I do not live in Toronto hence I do not use their library system, but I have borrowed books from various branches of my city’s public library only to discover other people’s bookmarks, grocery lists and even credit card receipts tucked between the pages.  Never, never, never a bed bug thankfully!  Not wanting to bore you with the specifics, I once left a CD in the front cover of a library book.  After I threw the book into the night returns slot I realized what I had done.  The next day – almost a full 24 hours later – I walked into the library, took the book off the shelf and much to my relief that it was there, removed my CD and left.  If the library does such a thorough inspection of books you would think that giving the book a once over and a shake would dislodge those miscellaneous items.

The Toronto Star article goes on to say, “In fact, it is more likely that someone will get bed bugs riding the subway than they will reading a book”.  Not all that reassuring!  Cross using public transportation off my list too?

So what’s to blame for the re-emergence of these pesky little bloodsuckers?

Having bed bugs is not a sign of dirt, filth or lack of cleanliness.  In fact, like so many of their brethren bugs, they prefer a clean environment.  They do like cosy little places where they can snuggle down and wait for their next meal to show up.  That next meal preferably being human – they like to hunker down in furniture and the like.  In the 1980’s the EPA outlawed the chemicals used to treat furniture and mattresses.  Since then the bed bug population has made a worldwide comeback.  Obviously, with the increase in international travel, they also pack themselves away for transatlantic flights nestled inside of suitcases.  Fortunately, bed bugs are more annoying than they are hazardous.  Uh-huh! Apparently there have been no studies that indicate bed bugs transmit disease to people.  One expert (whose name I forgot to note … sorry) said, “Bedbugs cause itching, of course, but they don’t spread any systemic illness and nobody dies from them.  The key is that the problem seems to be spreading and that it stands in for – and reflects back to us – our social anxieties, our worries that the culture has somehow gone too far.”

If you feel the need to know almost everything there is to know about bed bugs, that information can be found here http://www.edrants.com/_img/pestworldsurvey2011.pdf

I don’t really care about all that!  They are bugs!  I don’t want ‘em! 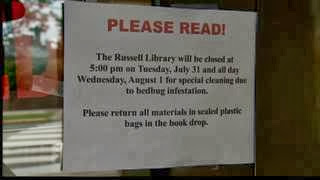 But back to the library; for anyone feeling a little superior about the bed bug issue because I have targeted Canadian libraries let me assure you there have been reports about bed bugs in library books in most major metropolitan cities across North America.  The Big Apple comes in at number one for highest rates of bed bug infestations (overall, not just libraries) with Philadelphia, Detroit, Cincinnati and Chicago following not far behind.  Lest any Californians feel smug about not making the list, I've just saved you for last, only because the bed bugs in your libraries seem to have a sense of humour.  The bed bug starring in the following article was found inside a copy of “Dead Reckoning”, the latest True Blood novel.  I'm sure the little guy was disappointed to find the title had nothing to do with what was between the pages.

Personally, the burning question is how do I stop from bringing these little parasites into my home?
One suggestion is to take a close look at the book.  If the infestation has been ongoing there are visual signs of spots and dots and little dried bed bug carcasses.  If these are noticeable point it out to library staff immediately. 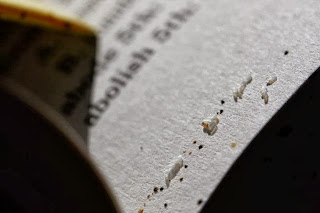 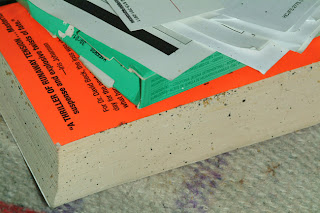 Another is to take precautions for “safe reading”.  Before you take that book to bed with you, place it in a tightly sealed Ziplocä bag and put it in the freezer for 24 hours. 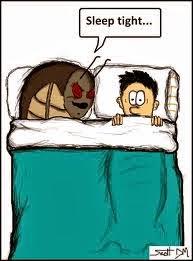