I Remember You - A Review

I REMEMBER YOU by Yrsa Sigurdardottir 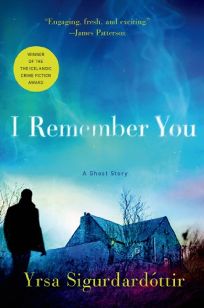 I am always in the market for a chilling ghost story and this is certainly a good one … part ghost story, part thriller.  The setting – Iceland – makes it chilling in more ways than one.

As Katrin, her husband Garoar and their friend, Lif accompanied by her little dog, disembark from a boat onto the lonely island in the Icelandic Westfjords the captain warns them, not for the first time, that cell phone reception is sketchy at best and the weather can turn nasty in minutes as he again reminds them that he will return in one week to pick them up.  Their reason for being on the island is to renovate an old house they purchased in the hopes of turning it into a successful guesthouse for summer tourists to the island.  Now, in the dead of winter, was the only time to get the renovations done.  They had heard rumors about the tragic history of the house and the previous owner, also in the midst of doing renovations had mysteriously disappeared, but this did not daunt them.  Neither curious nor superstitious they were determined to make this venture work.  The dog seemed to be the only member of the party even remotely apprehensive. 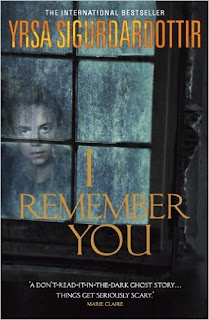 At the same time, on the mainland, a primary school has been broken into and vandalized with the word “Dirty” left scrawled on the walls.  Psychiatrist, Dr. Freyr is on the scene to help the police make sense of what has happened.  Having just moved to this small town from Reykjavik to try and move on after the disappearance of his son, Freyr is just glad to be busy.  Interestingly enough, an elderly patient of his attended this very school and it seems the same time of break in/vandalism happened some sixty years ago.  As Freyr investigates further into the crime some very astounding “coincidences” arise involving not only his son’s disappearance but also that of a boy sixty years before.

Admittedly this sounds like two different stories, but this is where Ms. Sigurdardottir shines.  The chapters alternate between what is happening on the island and what is happening on the mainland … after some cleverly distributed clues and elaborate twists and turns … everything eventually coming together in both a most chilling and quite unexpected manner.

While part of the book definitely falls into the thriller category I consider this book a good story of a haunting.  “I Remember You” does not rely on “in your face” apparitions and gore, but rather on those things that you just catch out of the corner of your eye; the smells that assault you unexpectedly and the mysterious stains that no amount of scrubbing removes.  All the wonderful elements that give you goose bumps.

I wanted to rate this book at 4 ½ stars.  Unfortunately, in the case of “I Remember You”, Ms. Sigurdardottir took the story a couple of pages too far for my liking.  I felt that rather than having a more than satisfying ending I closed this book slightly upset … not the way I wanted to leave the story.  Despite that if you enjoy an excellent haunting that will keep you turning that pages I do recommend this book.

ABOUT THE AUTHOR (from her GoodReads profile) 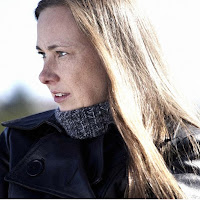 Yrsa Sigurðardóttir is an Icelandic writer, of both crime-novels and children's fiction. She has been writing since 1998. Her début crime-novel was translated into English by Bernard Scudder.

Yrsa Sigurðardóttir graduated from high-school in 1983, finished a B.Sc. in civil engineering from the University of Iceland in 1988 and M.Sc in the same field from Concordia University in Montreal in 1997.

Yrsa now works as a civil engineer for the company Fjarhitun, as well as being a writer.
Posted by Unknown at 3/03/2016