Ashes to Dust - A Review

ASHES TO DUST by Yrsa Sigurdardottir. 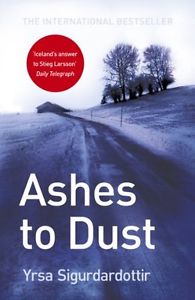 Dubbed the “Pompeii of the North”, archeologist Hjortur Fridriksson is trying to unearth some of the homes still buried on Heimaey Island after the 1973 volcanic eruption. For some reason this has Markus Magnusson in a bit of a tither.  He wants to get into the basement to retrieve a box he stored there the night the eruption began … a box, the contents of which he professes to have no knowledge because he did not ask any questions when his high-school crush asked him to hide it for her.  Lawyer, Thora Gudmundsdottir filed an injuction preventing Fridreksson from going ahead with any excavation of Markus’ home until he can enter the basement.

When Thora and Markus go down to retrieve the mysterious box they get more than they had bargained for – there among the ashes and dust lie three near-perfectly preserved bodies.  Markus is so shocked he drops the precious box only to reveal its grisly contents – a human head.

At the same time Alda, Markus’ high school crush, is found dead in her apartment.  At first it appears to be suicide, but then is quickly ruled to be a murder.  The timing is too coincidental to rule out the two incidents being related.

And so begins a twisted story of the happenings that fateful night that the volcano erupted on Heimaey Island.

I have enjoyed the previous two Thora Gudmundsdottir novels (Last Rituals, My Soul to Take) and although I enjoyed this one as well I found it to be one of those books that I struggled with for the first half and then devoured the second half in a couple of sittings.  It was definitely a slow burn to get to the meat of this book, but when the mystery started to resolve itself it was definitely worth plowing through.

As do most of her books “Ashes to Dust” has an extensive cast of characters and with the Icelandic names it took awhile to keep them all straight.  Again – worth it in the end.

Despite some of the drawbacks this was a good mystery with an ending that I thought I saw coming.  All I’ll say about that is that I was quite mistaken.

I have the next book in the series on reserve at the library and am looking forward to reading it.  Bella, a previously minor character in the role of Thora’s secretary, is given a more major part in this story and she is quite a “colorful” character so hope to get to know her a little better in the next book.  Also, Thora’s home life looks like it is about to become a little more complicated, so I am intrigued to see where that goes as well.

This is a series I enjoy and would recommend it to anyone looking for some good murder mysteries set in a most interesting locale. 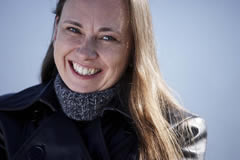 Yrsa Sigurdardottir works as a civil engineer in Reykjavik.  Her books for children have won prizes and gret acclaim.  Ashes to Dust is her third adult novel.

ABOUT THE TRANSLATOR (from the book cover)

Philip Roughton is a highly respected translator of Icelandic literature, having translated works by the Nobel Prize winner Hallidor Laxness, among others.  He lives in Reykjavik.
Posted by Unknown at 3/14/2016