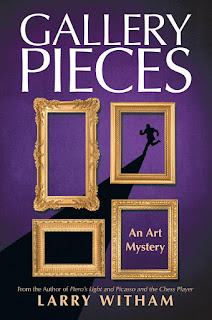 A former Navy Intelligence officer now working for Medici Studios in New York Julian Peale is entering the art world as an attempt at a new start in life.  Russian art smugglers are wreaking havoc on the New York art scene and Julian is tasked to run a sting operation in cooperation with NYPD.  The sting does not quite go as planned but an interesting clue emerges in the form of an art catalogue with some graffiti type markings on various pages.  When Julian begins to investigate the markings it takes him on somewhat of a wild goose chase as he learns about art auctions, street and performance artists as well as the seedier side of the art world including forgery and organized crime.  Coincidentally it also leads him down an unexpected path allowing him to try and resolve some ugly family history.  Julian never believed the accusations of stealing works of art made against his grandfather when he was involved with WWII’s “monuments men”.

Always intrigued by books dealing with the art world the book description caught my attention right away.  I must admit that I was also quite captivated by the cover image, although the book has nothing to do with the infamous art theft in Boston, it did bring to mind the empty frames hanging in the Gardner.

This book is well written, filled with interesting insights into the art world (and it’s underworld) yet not bogged down with facts.  Mr. Witham weaves his research and knowledge expertly into the story so it never feels like a lesson in art history.  I did enjoy the chase of the bad guys, the insight into the inner workings of the art auctions and the under story involving organized crime and forgery, but the part of the book that really took off for me was the part tying in the “monuments men” and the looting after WWII.

Julian Peal is an interesting character and Mr. Witham included just enough of his personal life to keep me invested in what happens to him during the book.  An obviously well thought out plot, the ending leading right back to the beginning, rounds out the rest of the book nicely.  Well-done Mr. Witham.

I would definitely recommend this to anyone who, like me, enjoys a fast paced mystery set against a backdrop of the art world.

Thank you to WordSlinger for sending me a copy of this book
in exchange for an honest review.

Larry Alan Witham is a veteran journalist and author in the Washington D.C. area who has covered current events, history, religion and society, science, philosophy, and the visual arts. He is currently exploring new writing and visual arts projects, following a decade of full-time writing and editing of books. He is the author of fifteen books, editor of a ten-book series, and in 2007 served as editor of the bimonthly magazine Science & Spirit. His latest three books have been on the visual arts and art history. From 2011 through 2012 he wrote a weekly art blog, "Artschooled."

A native of Los Altos, Calif. (born June 1952), Witham earned a bachelor's degree in fine arts from San Jose State University (1974). He and his wife, Kazui Yamamoto, live in the Maryland suburbs of Washington D.C.

An artist by avocation (painting and drawing), Witham's artworks may be seen at: www.larrywithamart.blogspot.com.

"After college, class of 74, I detoured from my training in the visual arts. Now I am finding time to return to that lifelong interest. I enjoy using traditional mediums and, at times, copying from traditional works, all part of a learning process as I form my own topics, voice, and techniques. For the past thirty-four years, I have been in the writing business. This has probably given me an overly literal view of the world—and of art. With me the art of painting or drawing is about observing nature, objects, or society, and enhancing that with human invention."