The House on Cold Hill - A Review

THE HOUSE ON COLD HILL by Peter James

“They said the dead can’t hurt you … they were wrong.” 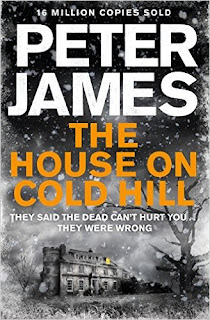 Whoa!  Anyone who has been following my reviews knows that I have a self proclaimed and always ongoing quest to find a really good ghost story.  There have been contenders, close calls and some that actually make the list.  “The House on Cold Hill” most certainly makes the list!

Ollie and Caro Harcourt and Jade, their twelve-year-old daughter, move to Cold Hill, a small village within commuting distance to Brighton.  Their new home, an old Georgian Mansion, has stood empty for a long time and needed some serious renovation.  Yes it was pushing their finances to the max but Ollie, an “eternal optimist” felt very positive about the whole project.  They were going to be living their dream.

From the moment they pulled up to the house, driving between the two stone pillars topped with the sinister looking wyverns, something was not quite right.  Was that someone watching them arrive through one of the dormer windows?

Mr. James spins a wonderfully suspenseful and scary story in this book.  He writes a ghost story the way its supposed to written … unusual and frightening things happening to an ordinary family – things that, with a little stretch of the imagination, can be explained away as normal happenings in a centuries old house undergoing renovations – that is explained away until things get really strange.  He builds, layer upon layer, so the reader slowly comes to care about Ollie and his family and between each layer he inserts another tingle.  As the truth around the history of the house is, ever so slowly, unraveled Mr. James gives his reader a sense that maybe, just maybe, everything is going to be okay now that the truth is revealed.  But will it truly be all right when the house really doesn’t like it when anyone leaves?

I loved it from the first page.  Five pages in I suspected that this was going to be a good ghost story.  Of course, many have started off strong only to tank in the last half or third of the book.  Not so in this case.  Mr. James gave me goose bumps right through to the last sentence.  Well done!

I would definitely recommend this book to anyone looking for a well-written horror/ghost story that doesn’t throw guts and gore at you, but rather gives you a nice, slow clackety ride to the top of the hill before your realize the stomach wrenching drop is inevitable.

This is the first book I have read by Mr. James and will definitely be checking out his other stand-alone novels. 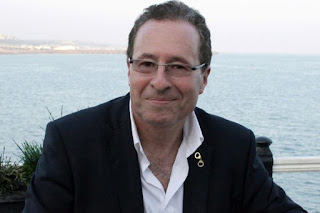 Home:
I lived for 10 years in a very haunted Georgian manor house, near Ditchling, Sussex. It was converted from a monastery built on the site of Roman ruins, and had the ghost of a Centurion, a monk, a baby and a nasty, man-hating grey lady! Then moved to a group of converted farm buildings on a historic site outside Lewes, which were occupied by a whole bunch of ghosts of victims of the Battle of Lewes, but they were politely evicted. My Sussex home is now a Victorian rectory and so far ghost-free, as is my apartment in Notting Hill, London, on the site of a former cinema. No spectral screenings yet during the night, but always hoping...

Made publishing history:
In 1994, in addition to conventional print publishing, Penguin published my novel, Host, on two floppy discs, and it is now in theScience Museum as the world’s first electronic novel. It caused huge controversy, I was pilloried on the Radio 4 Today Programme for attempting to destroy the novel, and I was front page news on many papers around the globe, all equally furious! In the immediate following years I became a media spokesperson for the electronic publishing age, and in 1996 found myself as a keynote speaker at a conference at UCLA on the future of reading, alongside (gulp) Steve Jobs and the CEO of Time Warner!
Posted by Unknown at 12/11/2015