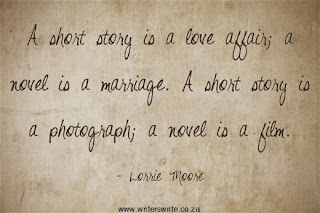 The short story can be defined simply as "a fictional work of prose that is shorter in length than a novel".  In "The Philosophy of Composition" Edgar Allen Poe wrote that "a short story should be read in one sitting, anywhere from a half hour to two hours".  According to the "Cliffs Notes" definition "a contemporary fiction short story can range from 1,000 to 20,000 words.  Because of the shorter length, a short story usually focuses on one plot line, one main character (with a few additional minor characters), and one central theme ... short stories also lend themselves more to experimentation -- that is, using uncommon prose styles or literary devices to tell the story".

I think short stories are like great poetry or a masterful work of art ... they have to draw you in quickly, hold your attention and then be willing to let your own life's experience, or even just your mood that day, give them a personal interpretation.  With any compilation of short stories not everyone will agree on a favorite.  Not everyone will see the stories the same way.  The chance that the author takes is that a reader might not like every story.  That's okay because that's part of what reading is all about.

I don't read short stories very often because sometimes they leave me feeling unsatisfied, the feeling that I want more than what was offered.  Not so with my two most recent reads this month.  Both were compilations of short stories and both wonderful in their own way.  Definitely worth picking up, if only to satisfy that need to read something quick between slipping into bed and turning off the light. 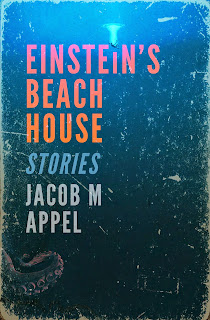 This is a book of short stories that deal with relationships, loss, imagination and life in general.  Some are a little dark; some are filled with pathos while others are humorous.

HUE AND CRY – Lizzie’s father is very ill and sometimes the only way one can deal with that is to focus on something else, which is exactly what Lizzie does as she begins spying on her next-door neighbor – the sex offender – the one everyone on the street wants gone.

“That year Lizzie’s kid sister kept a list of things that were funny when they happened to other people:  tarring and feathering, Peeping Toms, mad cow disease.”  It’s a wonderful first line.  And when I finished the story it turns out also to be the summary of what the story is about.  In my humble opinion, that’s some pretty good writing.

LA TRISTESSE DES DERISSONS – He wants a German shepherd and she wants a baby so they compromise and adopt a hedgehog.  Orion the hedgehog was not what one would describe as cuddly, what with the quills and all and definitely not the most conventional of pets especially when he becomes depressed and needs to see an animal psychologist.  How far will his owners go to keep him – and themselves – happy?

STRINGS – In an attempt to do one, hopefully last, good deed for her long ago ex-boyfriend newly married Rabbi Cynthia Felder agrees to let him use the sanctuary of her synagogue to hold a concert to break all records of the number of cellos performing simultaneously.  This story held two of my favourite passages in the book, one being the following:

Rabbi Cynthia is having second thoughts …

“It’s only for a few hours, Cynth,” he emphasized.  “We rehearse here until noon, then we go out to the park and perform the concert.  You’ll hardly even notice we’re here.”
“God will notice you’re here.”
Jacques shrugged.  “Maybe God sleeps late,” he said.  “Besides, it’s a Sunday, if He is awake, won’t he be hanging out with the Catholics?”

LIMERENCE – Jesse and his high school friends spend a lot of time pondering many subjects but as Jesse says, “the bulk of our attention focused on girls”, Lena Limpetti in particular.

I admit that I had to look up the definition of the word “limerence”.  Coined in 1979 by psychologist Dorothy Tennov, it is defined as “a state of mind which results from a romantic attraction to another person typically including compulsive thoughts and fantasies and a desire to form or maintain a relationship and have one’s feelings reciprocated”.

Had I read Mr. Appel’s story first I would not have needed to look up the meaning of the word.

EINSTEIN’S BEACH HOUSE – What happens when, because of a innocent yet fortuitous error someone else made, that you try to take advantage of (to help your family) goes terribly, horribly, tragically wrong?  This is the story that answers the question.

THE ROD OF ASCLEPIUS – Although she knows her father is not a doctor she accompanies him to many hospitals over the years, beginning with the one where her mother died.  Each time the visit begins with the question, “Are you ready to change the world, Princess?”  At his side she learns an important lesson, “the horror and thrill of saving lives”.

SHARING THE HOSTAGE – Sometimes couples break up and nasty custody battles ensue.  It’s not always children that are the subject of these battles, in this case, it’s a tortoise named Fred.

PARACOSMOS – Children have imaginary friends, there’s nothing unusual about that and as the children grow their imaginary friends become less important and eventually disappear.  What happens when your daughter’s imaginary friend’s father shows up at your door asking why the girls don’t play together anymore?

As I mentioned earlier I don’t normally read short stories.  I tell myself I don’t enjoy them as much as a novel.  Yet, whenever I do pick up (or as in this case receive) a collection there is always at least one story that makes it worthwhile.  I knew I wanted to read this book when I read the description of “Paracosmos”.  I would call it my second favorite in this collection.  Much to my surprise another became my very favorite.  I find it so difficult to rate a book of short stories; unless there is the thread of a character or location tying the stories together they need to each be taken on their own merit.  These are well written and (to me) are almost allegories or fables, each taught some lesson in its own unique way.  Add that to their enjoyment factor and I’d say this book is definitely worth 5 stars. 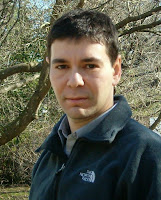 Jacob M. Appel's first novel, The Man Who Wouldn't Stand Up, won the Dundee International Book Award in 2012.  His short story collection, Scouting for the Reaper, won the 2012 Hudson Prize and published by Black Lawrence in November 2013.

Jacob has been admitted to the practice of law in New York State and Rhode Island, and is a licensed New York City sightseeing guide. 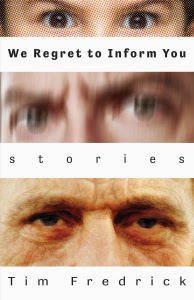 WE REGRET TO INFORM YOU
by Tim Fredrick.

This book of short stories, dealing with relationships of one kind or another, had me on a bit of an emotional roller coaster ride.  Some of the stories managed to evoke real sadness while others an unexplained sadness, some definitely made me smile while two actually made me laugh out loud.

BY THE STREAM ON MOVING DAY – The narrator and Henry were best friends all through childhood, until Henry’s parents divorced and he and his mother eventually moved away.  Reconnecting as adults brought to the forefront some realities they had not realized as children … that last hug they shared may have been more than a simple hug.  But it’s true what they say about not being able to “go home” again. This story contained my favourite passage in the book,

“ He was always affable growing up, not at all the neurotic child of divorce like my other friends from broken homes.  My own home was broken but has been sloppily stuck back together, complete with visible cracks and tiny missing pieces.  Henry lived the dream:  two rooms, two sets of presents, two vacations, zero arguing parents.”

THIS ONE NIGHT IN THE BAR WHERE I WORK – A waiter and bartender observe a couple having an argument in bar.

The writing has no discernible formatting, sentence structure, little punctuation and no upper-case letters to distinguish sentences.  (I thought it was my e-version of the book to blame but all the other stories were fine.)  No it was simply frantic writing (and reading) and THE perfect to convey the tone of the argument.

EGG AND SPOON – A young boy who seems to not have a lot going for him decides to make his mark on the world by breaking the Guinness World Record for an Egg and Spoon race.

Although a little heartbreaking, looking back, this was my favourite story in the book.

This is most detailed story in the book.  I enjoyed this story because it has a definite beginning, middle and end and the most evolved characters.  As a reader of primarily full-length novels this story fulfilled my need for “completeness”.

The above are just four examples of the fourteen stories included in this book.  The other stories range in scope from a man reminiscing about each of his erections from pre-puberty through to adulthood (A Tale of Five Thousand Erections) and the couple who found each other because of an unusual physical condition (My Right Armpit Sweats More Than My Left One) ... those two made me laugh out loud ... on to the touching entries such as Driving Lessons and My Father the Statue.  Wow, I could go on describing all the stories.  As I type each on I think of the others I enjoyed.  You'll have to pick up the book and read them for yourself.

Mr. Fredrick does display a wide variety of writing styles in this compilation, and he does them all very well.  I certainly have the utmost admiration and respect for his talent, yet as with all compilations some stories will resonate with readers more than others and that it just the nature of the short story.  The range of stories in this book guarantees there is something for everyone.  Funnily enough, the story I personally enjoyed the least is the story that offered this book its title.

Tim Fredrick is a writer and teacher from Queen’s N.Y.  His writing interests include literary fiction that explores relationships with family; making a family and the longing we all have for connection.

He is also the founding editor of Newtown Library, a journal dedicated to supporting and promoting the work of Queen’s writers.

Originally from Pittsburgh, PA, Fredrick moved to New York City in 1997 and has been living and working there since.  He lives with his dog Logan in Rego Park, Queens.