A Darkness Absolute - A Review

Miss Armstrong had me hooked from the opening sentence.  Her ability to create unique “worlds” for her novels and characters never ceases to amaze me.  This second book in the “City of the Lost” series took me once again to the middle of nowhere, Rockton, Yukon Territories ... the place people go when the want or need to disappear from their everyday lives.

A DARKNESS ABSOLUTE by Kelley Armstrong

Yup … Rockton is where people come to disappear but unfortunately they don’t check their natures at the door.  What Casey very quickly finds out is that when you populate the town with troubled people often their troubles come with them.  This means sometimes people DIS-appear from Rockton too.

Tracking a town runaway through a blizzard is not an easy feat but you have to know when to call it quits.  Casey and Deputy Will Anders come to just that conclusion when they can no longer see each other on the trail.  Taking shelter in a nearby cave they come across a surprise – a woman thought to be another town runaway thought lost and dead – here in “their” cave, where she has been held captive for over a year.  Despite being taken care by someone she cannot identify her captor.  When they bring her back to town she seems to be all right despite her ordeal.  Maybe a little too all right?  Was it someone from town or one of the hostiles living in the wilderness?  Casey Duncan and her (now) boyfriend Sheriff Dalton are determined to find out but just how do you do that when the whole town could be suspects.

In the first book of the series we got a brief glimpse of the “outsiders” and the “hostiles”; those people living, to varying degrees outside the town.  Bad enough trying to identify suspects when all your neighbours are living a lie but how do you go about finding people who have no desire to be found and are not shy about letting you know that.

A few new characters were introduced in this book and a few from the first were fleshed out a little bit more – all interesting and unique.  And, the new puppy was a nice touch.  Another page-turner that kept me guessing to the very end.  Looking forward to the next in the series.

ABOUT THE AUTHOR (from her web page) 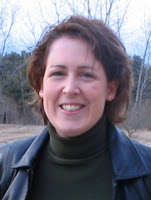 Kelley Armstrong has been telling stories since before she could write. Her earliest written efforts were disastrous. If asked for a story about girls and dolls, hers would invariably feature undead girls and evil dolls, much to her teachers’ dismay. Today, she continues to spin tales of ghosts and demons and werewolves, while safely locked away in her basement writing dungeon. She lives in south-western Ontario with her husband, kids and far too many pets.
Posted by Unknown at 4/01/2017