The Twenty-Three - A Review

After reading the first two books in this Promise Falls trilogy I waited quite awhile before picking up this last book.  I don’t know why I waited so long but now that I’ve read it I’m on the fence about this one.

THE TWENTY-THREE by Linwood Barclay 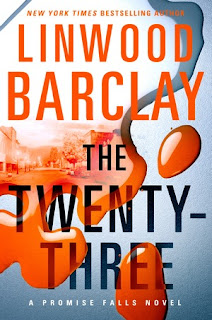 Promise Falls is a small town that has been under siege for a long while now and the number 23 seems to be important to whoever is perpetrating the horrendous acts.  Now it’s the Memorial Day weekend, May 23rd and as the sun rises people are dropping like flies.  It doesn’t take long to figure out that something has been put into the water supply.   As if that wasn’t enough for the hospital and police department to deal with another murder occurs – one bearing horrible similarities to two past, as yet unsolved, murders.  Could all these events be related?

Mr. Barclay once again gave me a page-turner.  Things in Promise Falls were happening and they were happening quickly.  For this reader it was almost too much, too quickly.  Just when I was catching on to what was happening with the water the scene switched to the murder and then a quick cut to the mayoral candidate and then back to the water treatment plant.  While I don’t mind a lot of action this instalment in the trilogy seemed overpopulated and slightly out of control.  The mystery of “23” was solved and yet with everything that went on there were still some questions unanswered.

Mr. Barclay has stated this is his last visit to Promise Falls.  We’ll see? 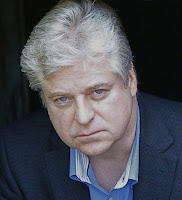 After spending his formative years helping run a cottage resort and trailer park after his father died when he was 16, Barclay got his first newspaper job at the Peterborough Examiner, a small Ontario daily. In 1981, he joined the Toronto Star, Canada’s largest circulation newspaper.

He held such positions as assistant city editor, chief copy editor, news editor, and Life section editor, before becoming the paper’s humour columnist in 1993. He was one of the paper’s most popular columnists before retiring from the position in 2008 to work exclusively on books.

Barclay was born in the United States but moved to Canada just before turning four years old when his father, a commercial artist whose illustrations of cars appeared in Life, Look and Saturday Evening Post (before photography took over), accepted a position with an advertising agency north of the border. Barclay, who graduated with an English literature degree from Trent University, in Peterborough, Ontario, was fortunate to have some very fine mentors; in particular, the celebrated Canadian author Margaret Laurence, whom Linwood first met when she served as writer-in-residence at Trent, and Kenneth Millar, who, under the name Ross Macdonald, wrote the acclaimed series of mystery novels featuring detective Lew Archer. It was at Trent that he met Neetha, the woman who would become his wife. They have two children, Spencer and Paige.