This One Just Didn't Work For Me

13 WAYS OF LOOKING AT A FAT GIRL by Mona Awad 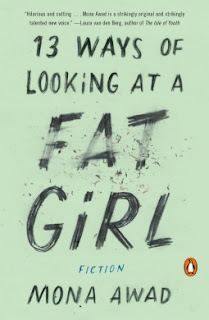 Some words that were used to describe this book were “sparkles with wit”, “sparks of humor in the deepest dark” and “tender and moving depiction of a lovably difficult young woman”.  Well, I didn’t find it any of those and almost DNF’d the book at the halfway point, but with only about 100 pages left to read I persevered hoping that after Liz/Liza/Elizabeth/Beth (even her husband can’t keep straight which name she chooses to use at any particular time in her life) grew out of her teenage angst stage she would become a character I could relate to – didn’t happen.

Being an often-backsliding-battle-of-the-bulger myself I am frequently drawn to books featuring characters waging the same war.  Add to that the fact that the setting for part of this book was Mississauga, Ontario (or Misery-Saga as Elizabeth refers to it) the book held appeal on a few levels which enticed me to pick up.  In similarly themed books, whether the character succeeds and is blissfully happy in the their thinness, fails and comes to grips with their body or somewhere betwixt and between I am happy for them.  Elizabeth did none of those … she was miserable fat and even more so thin.  Not only that, she seemed to make everyone around her unhappy as well.

The story is written presenting short periods of Elizabeth’s life that I assume are to be the “13 ways of looking” referred to in the title.  I found this a little off-putting as the time line would jump months or years into the future with no warning or explanation of why events were now so different from the previous page.

From her disastrous teen role models through her horrific on-line dating experiences to her hard won weight loss success and eventual falling of the wagon, this book did not work for me.  Even the parts that I understood were supposed to be humorous just seemed sad.  For me, everything about this one just did not work. 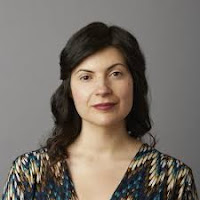 Mona Awad was born in Montreal and received her MFA in fiction from Brown University.  Her work has appeared in McSweeney’s, the Walrus, Joyland, Post Road, St. Petersburg Review and elsewhere.  She is currently pursuing a Ph.D in creative writing and English literature at the University of Denver.